Up to 400 people are expected to cycle a total of 11,000km over 12 hours as part of the Great Cycle Challenge at the Sports Super Centre on the Gold Coast this Saturday – all in the name of fundraising for children’s cancer research.

The Great Cycle Challenge has been running throughout October to raise money for Children’s Medical Research Institute. The concept is simple – participants set themselves a goal of how many kilometres they want to ride anywhere in Australia and ask people to sponsor them along the way.

While most people have been hitting the road, some are choosing to clock up their kilometres on a stationary bike at gyms like the Sports Super Centre in Runaway Bay. On Saturday (28th October) from 6.30am 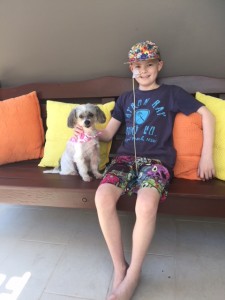 to 6.30pm the Centre will make its 30 exercise bikes in the gym’s spin studio available to members and the public. The Sports Super Centre has set itself a challenge of 360 participants collectively cycling 11,000km to raise a minimum of $3000.

One of the centre’s personal trainers, Gregg Major, is even going to attempt to cycle for the full 12 hours.

“I’m going to give it a crack,’’ Gregg said. “If it means raising funds and awareness for children’s cancer and research then I’m happy to give it a go. It’s for a really great cause.’’

Another highlight of the day will be a visit from 10-year-old Harry Hunter (pictured), who is fighting Philadelphia Positive Acute Lymphoblastic Leukaemia. Harry’s condition is caused by a very rare mutation in his DNA, which blocks chemotherapy from working. Usually children with this form of leukaemia have to undergo transplant surgery, but due to scientific research a new medication that blocks this mutation is now available.

After three years of intense treatment, Harry is in remission but still has to undergo treatment. His biggest aim is to get back into swimming and basketball with his friends, according to mum Natasha.

“Harry shows tremendous bravery and resilience when facing all his treatments,’’ Natasha said. “He accepts what is and what he has to do. He always has a smile on his face.’’

Harry will make an appearance during the Kid’s Hour at the Sports Super Centre’s Great Cycle Challenge from 10.30am-11.30am.

There will also be a sausage sizzle, giveaways and raffles including a gym membership. On the day, a live DJ will spin some tunes in the spin studio from 1.30pm-3.30pm.

The event is open to everyone to take part and there are still some spots free between 12pm-3pm to join in.

To register and pay for a bike, you can call the Sports Super Centre on (07) 5500 9988, or alternatively just pop into the centre.

If you’d prefer to donate to the centre’s cause, visit greatcyclechallenge.com.au and go to the Sports Super Centre Gold Coast Great Cycle Challenge page.